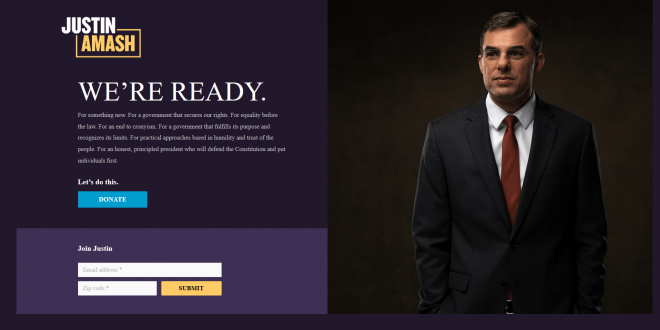 Rep. Justin Amash (I-Mich.) announced on Tuesday night that he has “launched an exploratory committee” to seek the Libertarian Party’s 2020 nomination for a possible third-party presidential run.

Amash gained notoriety last year when he came out as the lone House Republican to support the impeachment of President Trump following the publication of the Mueller report. He later switched his party affiliation to independent.

It is clear Amash wants to position himself as an alternative to President Trump, having criticized his handling of the novel coronavirus response.

Today, I launched an exploratory committee to seek the @LPNational’s nomination for president of the United States. Americans are ready for practical approaches based in humility and trust of the people.

We’re ready for a presidency that will restore respect for our Constitution and bring people together. I’m excited and honored to be taking these first steps toward serving Americans of every background as president.

Why don’t you just use “Vote Amash to Elect Trump” as your slogan?

Pretty depressing that principled stances seem to always be a means to some personal end.

The way to deprive Trump of a second term is not to be a spoiler, it’s to get behind the Democratic nominee. Don’t be Jill Stein.

I was under the impression you didn’t like Trump. Do this and you might as well wear a MAGA hat.