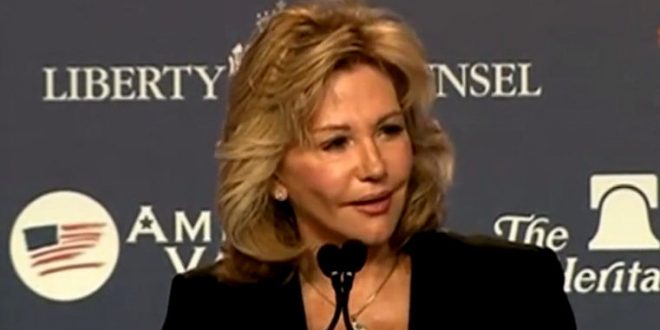 AFA Defends Trump On Disinfectants: He’s Not Crazy, He Knows So Many More Things Than Those Reporters

“Ironically, it occurred to me that often when the president says something like that and they quickly accuse him—‘He’s crazy! He’s out of his mind! How could he say that?’—often, well let’s see, it just turns out to be true,” [AFA radio host Sandy] Rios said.

​Rios then attempted to back up Trump’s remarks ​on UV light by pointing to findings that UV light can kill viruses on surfaces–but scientists suggest its use on inanimate objects, not people, and warn it would be dangerous to expose the human body to UV light. Nevertheless, Rios defended Trump’s intellect.

“The president is not, as a matter of fact, crazy at all. He’s crazy like a fox. He’s very smart, and he knows so many more things than those 20​, 30-year-old [reporters], maybe 40​ … he might just know more than they know, but they will never admit it,” Rios said​. “They just, they pounce like vultures on a piece of red meat.”

Previous Military Air Teams Perform NYC Area Flyovers [VIDEO]
Next Hillary Clinton Endorses Biden: Imagine When We Have A Real President, Not A Man Who “Plays One On TV”