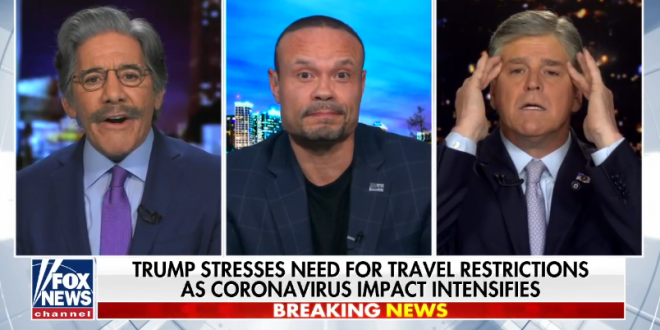 Wild Blowup On Hannity After Geraldo Rips Stephen Miller, Gets Told Any Criticism Is “Chinese Propaganda”

“Don’t give me that crap,” Rivera fired back. “You’re a cheap-shot artist!” Bongino responded by saying Rivera was a “bullshit artist.” “What you just said is Chinese propaganda,” he repeated. “That Stephen Miller cheap shot is outrageous.”

As you’ll see in the clip, at one point Geraldo appears to challenge Bongino to a fistfight.

Watching all the Conservatives gang up on Geraldo Rivera after his spat with Dan ‘Bonkers’ Bongino on Fox News. It always amazes me how quick and willing they are to shit on one of their own if they so much as say a bad word against their Dear Leader. Insane.

#EuropeanTravelBan might slow spread of #CoronaVirus short term but smacks of senior presidential aide #StephenMiller creepy Xenophobe who’s architect of our regressive immigration policies. Due respect to @realDonaldTrump but @JoeBiden seems to have better overview of crisis