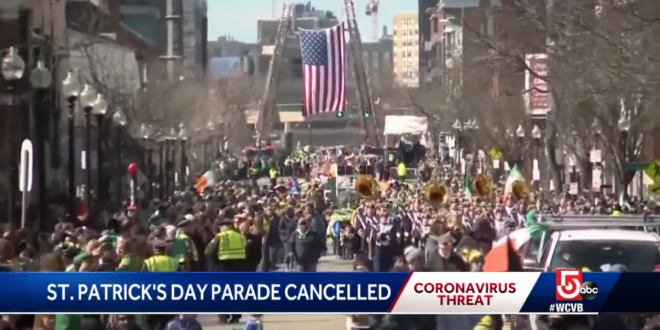 The two big South Boston St. Patrick’s Day traditions of a parade in the streets and a breakfast for area VIPs have been canceled over fears of the spreading coronavirus, officials announced Monday night.

“In collaboration with Congressman Lynch, Councilors Flaherty and Flynn, Senator Collins, Representative Biele, and David Falvey from the South Boston Allied War Veterans Council, the St. Patrick’s Day Parade is being cancelled,” Mayor Martin Walsh said in a statement just six days before the parade was due to step off on Sunday.

State Sen. Nick Collins of South Boston, who hosts an annual Paddy’s Day breakfast for Boston big-wigs, announced Monday night that that also is being scuttled.

More than 40 U.S. colleges have canceled in-person classes due to the coronavirus, as of Tuesday morning.

In most cases, colleges that have canceled in-person classes have taken steps to offer some instruction online in the interim, and those that are still holding classes are preparing to do the same if necessary.

The status of three San Jose Sharks hockey games, the NCAA women’s basketball tournament at Stanford and one MLS game are in doubt after Santa Clara County announced a ban of all large gatherings of at least 1,000 people for the rest of the month in response to the coronavirus outbreak.

The announcement Monday came hours after the public health department announced the first death in the county from COVID-19. A woman in her 60s had been hospitalized for several weeks with the virus before dying. The ban will go into effect at midnight PT on March 11, and will last at least three weeks — or until April 1.

Officials with promoter Goldenvoice are working on a plan to try and move the Coachella Valley Music & Arts Festival in Indio, California, to the weekends of Oct. 9 and Oct. 16 in an attempt to save the event from cancellation amid concerns about the coronavirus outbreak, according to high level sources. The AEG-owned concert promoter is also working to move the Stagecoach country music festival to October as well, possibly to Oct. 23.

Los Angeles County officials have discussed the possibility of banning spectators from attending sporting events in Southern California in an attempt to slow the spread of the coronavirus.

The BNP Paribas Open at Indian Wells, one of the top tennis tournaments in the world, was canceled Sunday over coronavirus concerns.

NBA, MLB, MLS, NHL: In a joint statement, the four leagues announced Monday that all team locker rooms and clubhouses will be open only to players and essential team employees “until further notice.” The media will not be allowed in locker rooms.