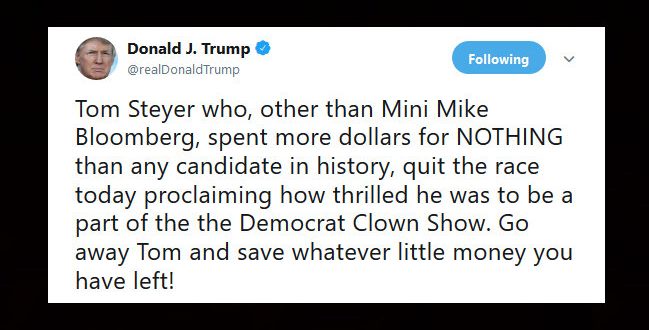 President Trump mocked billionaire Democratic presidential hopeful Tom Steyer after he dropped out of the race on Saturday night. Steyer, whose net worth is estimated at $1.6 billion, spent approximately $252 million on his campaign, according to the Center for Responsive Politics.

Trump used Steyer’s decision, which followed former Vice President Joe Biden’s win in the South Carolina primary, to attack Biden’s rival Mike Bloomberg, who is still in the race. During the 2016 election, Steyer gave about $65 million to support Democratic candidates and environmental causes, according to Forbes.

Tom Steyer who, other than Mini Mike Bloomberg, spent more dollars for NOTHING than any candidate in history, quit the race today proclaiming how thrilled he was to be a part of the the Democrat Clown Show. Go away Tom and save whatever little money you have left!

I would find it hard to believe that failed presidential candidates Tom Steyer, or Mini Mike Bloombeg, would contribute to the Democrat Party, even against me, after the way they have been treated – laughed at & mocked. The real politicians ate them up and spit them out!

You have two REAL billionaires coming after you with LONG money, enough to bury you in an avalanche of ads.

You SHOULD be scared, dimwit.

The only one being laughed at and mocked is YOU.

Mini Mike Bloomberg’s consultants and so-called “advisors”(how did that advice work out? Don’t ask!), are on the “gravy train” and all making a fortune for themselves pushing Mini hard, when they knew he never had what it takes. Don’t pay them anymore Mike, they led you down….

…..a very dark and lonely path! Your reputation will never be the same!