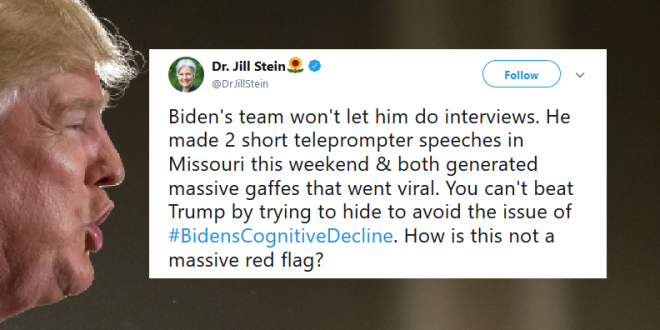 Former Green Party presidential candidate Jill Stein said that Democrats are in for an “agonizing 8 months” if they nominate former Vice President Joe Biden as their candidate for the White House.

Stein, who graduated from Harvard Medical School in 1979, warned Democrats that Biden might flounder on the campaign trail because of his “obvious cognitive decline.”

President Trump has already taken shots at Biden’s mental acuity. At a March 2 rally, Trump joked that if Biden were elected president, he would spend his term in a “home, and other people are going to be running the country.”

The first tweet below was retweeted by Trump this morning.

Biden’s team won’t let him do interviews. He made 2 short teleprompter speeches in Missouri this weekend & both generated massive gaffes that went viral. You can’t beat Trump by trying to hide to avoid the issue of #BidensCognitiveDecline. How is this not a massive red flag?

Biden’s lies & record are bad enough, but the biggest risk is his obvious cognitive decline. He said he’s running for Senate, confused wife & sister, forgot Obama’s name etc. This isn’t going away. If Dems close their eyes & keep pushing Joe, it’ll be an agonizing 8 months ahead.

Previous Fox Host: Coronavirus Is An “Impeachment Scam”
Next US Wave Of Cancellations: Parades, Schools, Sports