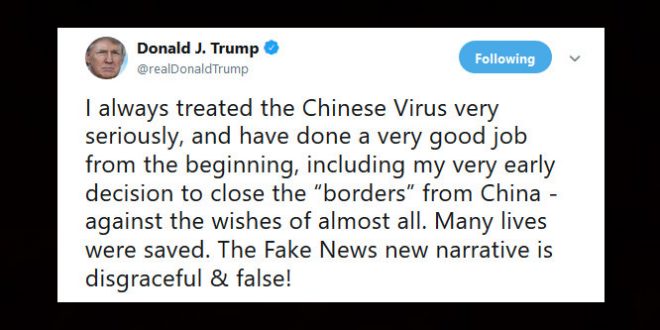 President Donald Trump reiterated a comment he made Tuesday during a White House press conference on Twitter Wednesday morning amidst numerous and critical reports of his administration’s response.

On Tuesday he made the specious claim that he always considered the coronavirus outbreak as a pandemic, despite the fact that he had said the direct opposite weeks earlier.

Amid the surprise by many in the press of such a bold statement, Trump doubled down on Twitter saying that he has “always treated the Chinese Virus very seriously, and have done a very good job from the beginning.”

I always treated the Chinese Virus very seriously, and have done a very good job from the beginning, including my very early decision to close the “borders” from China – against the wishes of almost all. Many lives were saved. The Fake News new narrative is disgraceful & false!

cool damage control bro. too bad you left a paper, audio and video trail of seven weeks of incompetence and lies. hashtag sad