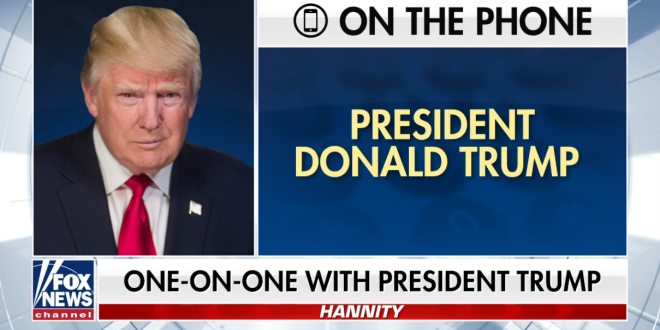 Speaking with Sean Hannity on Fox News on Thursday night, Trump again minimized the impact of the global coronavirus pandemic, casting doubt on the need for tens of thousands of ventilators for hospitals responding to the crisis.

“I have a feeling that a lot of the numbers that are being said in some areas are just bigger than they’re going to be,” he said. “I don’t believe you need 40,000 or 30,000 ventilators. You go into major hospitals sometimes, and they’ll have two ventilators. And now all of a sudden they’re saying, ‘Can we order 30,000 ventilators?’”

Here’s what Hannity is talking about in the run up to his interview with Trump pic.twitter.com/8IsVkEmxUS

Trump was laughing on Hannity.

That says everything we need to know.

Hannity asks how Trump’s 9 p.m. call with Chinese President Xi Jinping went. Trump says he pushed it until 10:30 to come on his show.

“It’s so unfair, it’s so unfair,” Trump says of “the media,” which he doesn’t appear to consider Hannity to be a part of.

Hannity says he’s talked to Dr. Oz a lot and that Oz has talked a lot about the use of chloroquines to treat coronavirus patients. Oz has talked to administration officials about the possible use of the drug. “We have to see whether or not it works,” Trump says.

Hannity and Trump are now playing the whataboutism game by bashing Obama and Biden for their response to the H1N1 flu — as if that’s a defense of Trump’s mishandling of the coronavirus pic.twitter.com/7tOoyNYsbo

Trump wrongly says “there’s no risk” to taking a medication for the coronavirus if “it’s already out there” for other purposes.