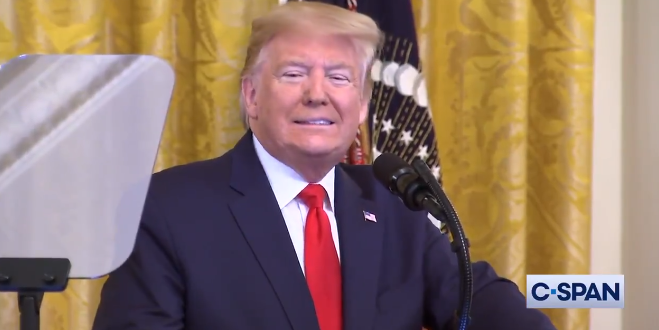 Using his typical insult for Biden, Trump first brought up the H1N1 swine flu epidemic that hit during the early years of the Obama administration, and made two inaccurate or misleading statements. The 78 percent figure Trump cited seems to derive from a Gallup poll from early February 2020 — when public focus on the outbreak was low — that found 77 percent of Americans had “high confidence” in the government’s ability to handle the COVID-19 outbreak.

However, that same polling data also contradicts Trump’s other claim, as Gallup also found that 67 percent of the public had had high confidence in the Obama’s administration’s H1N1 response in 2009, second-highest on record.

In a follow-up Tweet, Trump then slammed the Obama White House for waiting until October 2009 to declare the H1N1 swine flu a “national emergency.” But that too is a partly misleading claim, as the Obama administration had already declared the epidemic a “public health emergency” in April, just weeks after the virus was detected and before anyone had died.

Sleepy Joe Biden was in charge of the H1N1 Swine Flu epidemic which killed thousands of people. The response was one of the worst on record. Our response is one of the best, with fast action of border closings & a 78% Approval Rating, the highest on record. His was lowest!

President Barack Obama and VP Joe Biden handled the H1N1 swine flu epidemic by declaring a national emergency when there were only 20 confirmed cases of it in the US. Also, the stock market did not plummet like a rock back then and actually went into a sustained recovery.

Trump still has not declared a national emergency that would activate FEMA for the WHO declared coronavirus pandemic because he is afraid of the optics. Trump is also injecting 1.5 trillion into a mangled economy to help the wealthiest CEOs but doesn’t care about the uninsured.

“The Obama White House had to immediately issue an apology for Joe Biden’s remarks, and any alarm that he might have caused, an alarm about a Swine Flu outbreak that took 6 months for President Obama to declare a National Emergency, and that killed 12,000 Americans.” @LouDobbs

You’re a LIAR! Every time you screw up you try to throw President Obama under the bus to take attention off your incompetence.

Obama declared a national emergency in April, before anyone died. Bigots keep spreading lies because y’all still can’t stand that a Black man was POTUS. pic.twitter.com/0RrNmluCry