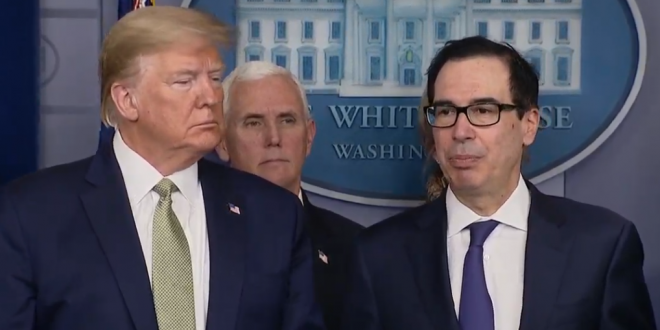 Trump Is “Looking At Sending Checks To Americans”

“At my direction, [Treasury] Secretary Mnuchin is meeting today with senators on additional stimulus packages,” Trump said, adding that they are looking at loans for small businesses and flexibility for fast food workers. Mnuchin announced that the administration is looking at sending checks directly to American households that are hurting – possibly within the next two weeks.

“We are looking at sending checks to Americans immediately. What we heard from hardworking Americans, many companies are now shut down whether bars or restaurants, Americans need cash now and the president wants to get them cash now. I mean now in the next two weeks,” Mncuhin said. “We want to make sure Americans get money in their pockets quickly,” he said, adding that more details would be revealed later today.