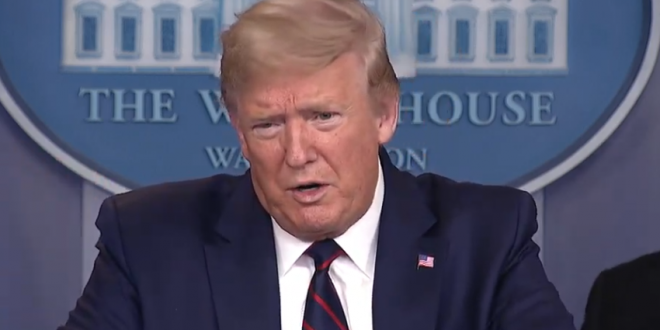 Trump: Governors Who Won’t Blow Me Get No Help

President Donald Trump said Friday that he instructed Vice President Mike Pence not to reach out to governors who aren’t “appreciative” of his administration’s efforts to slow the spread of the coronavirus in their states. “If they don’t treat you right, I don’t call,” Trump said of those state leaders.

The president mentioned Washington Gov. Jay Inslee and Michigan Gov. Gretchen Whitmer, both Democrats who have been critical of the White House’s actions to combat the deadly pandemic.

The President says he has told the leader of the federal government’s coronavirus response not to call the governors of Michigan and Washington state, two of the biggest hotspots in the country, because they are “not appreciative.”

TRUMP: “I think they should be appreciative… I say Mike, don’t call the governor of Washington. You’re wasting your time with him. Don’t call the woman in Michigan. It doesn’t make any difference what happens. You know what I say? If they don’t treat you right, I don’t call.”

BREAKING: Trump just attacked the Governors of Michigan and Washington, saying he’s mad at them because “I want them to be appreciative.” That has got to be one of the most awful, selfish and despicable things he’s ever said. Hundreds of Americans died today. Hundreds. #MasksNow

If you wondered how Trump intimidated Ukraine, he just provided a demonstration on live TV when discussing how he won’t help Washington and Michigan unless their governors kiss his ample behind. pic.twitter.com/UfewpbsEpn