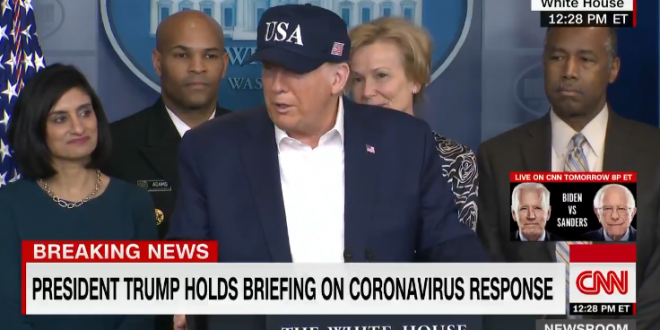 Trump Claims He Was Tested For Coronavirus [VIDEO]

President Donald Trump said he has been tested for coronavirus, a precaution taken after he was in physical contact with people who have since tested positive for the virus.

During a Saturday press conference, Trump said he was tested on Friday after pressure from the media and public health experts.

Despite days of White House denials that he didn’t need to be tested because he wasn’t exposed for long periods of time — including in a memo from his physician — it seems either Trump or his medical team changed their mind.

President Donald Trump told reporters on Saturday that he has been tested for the coronavirus, contradicting a White House report late Friday that he would not get tested. https://t.co/wTc5qpiuqq

NEW: Pres. Trump says he was tested for COVID-19 after being pressed on whether he would take it after meeting with Brazilian official who reportedly tested positive for the virus. “I decided I should based on the press conference yesterday.” https://t.co/kAUWcu0Kk0 pic.twitter.com/XJbBQRdfqY

Previous Trump To Extend Travel Ban To UK And Ireland
Next Tennis Legend And Anti-LGBT Activist Margaret Court: The Blood Of Jesus Protects My Church From The Virus