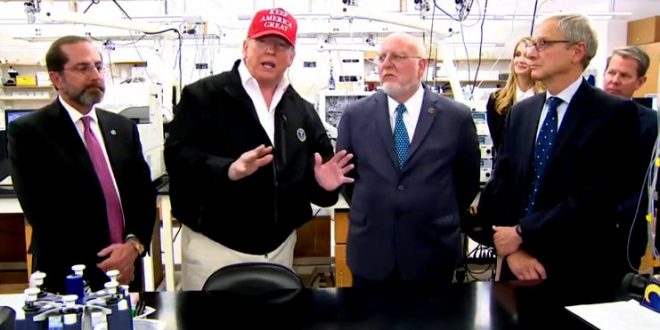 Trump At CDC: My Coronavirus Response Has Been As “Perfect” As My Ukraine Call (Call Got Him Impeached)

President Donald Trump invoked his supposedly “perfect” phone call with Ukraine — the one that resulted in his impeachment for abuse of power — while briefing reporters at the Center for Disease Control in Atlanta.

CNN host Jake Tapper dismissed  Trump’s appearance at the CDC as a “photo op” after the president was recorded wearing a “Keep America Great” hat.

Trump at CDC: “But as of right now and yesterday, anybody that needs a test, that’s the important thing. And the tests are all perfect like the letter was perfect. The transcription was perfect. Right? This was not as perfect as that but pretty good.”

This is tinpot dictator bullshit and Redfield has more to answer for than almost anyone. https://t.co/Oi72RssnxV

Trump cultivates this bullshit. The main thing CDC director wants to say is thank Trump for decisive leadership and giving everyone energy to carry on? WTF. The President’s ego is the top of the priority list. He’s already been failing miserably. https://t.co/w5azeBsRZ8