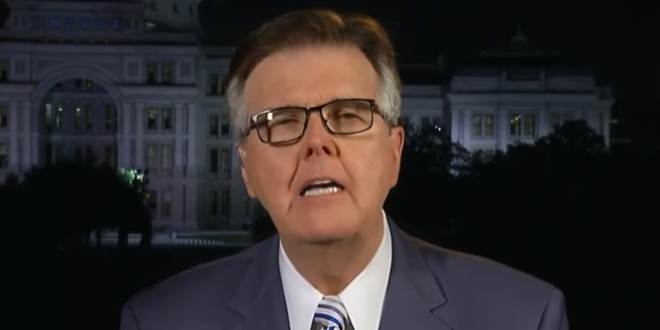 Texas Lt. Gov Dan Patrick: Grandparents Are Willing To Risk The Coronavirus To Save The Economy [VIDEO]

Texas Lt. Gov Dan Patrick (R) on Monday said that he is willing to take a chance on his survival as a senior citizen for the good of the country’s economy amid the virus outbreak and added that thinks “there are lots of grandparents out there in this country” who feel the same way.

“No one reached out to me and said, as a senior citizen, are you willing to take a chance on your survival in exchange for keeping the America that all America loves for your children and grandchildren? And if that’s the exchange, I’m all in,” Patrick said during an appearance on Tucker Carlson’s Fox News program on Monday night.

Dan Patrick with a white hot take on Tucker Carlson that boils down to “trust me, old people are willing to die for Wall Street” pic.twitter.com/xwZOZ1x3T0

Texas Lt. Gov. Dan Patrick suggests he, other seniors willing to die to get economy going again.
“Those of us who are 70 plus, we’ll take care of ourselves. But don’t sacrifice the country,” Patrick told Tucker Carlson: @NBCNews. #TexasCoronavirus https://t.co/opLuEFJy8D

Texas’s Lt. Gov, Dan Patrick, who is 69 years old, tells Tucker Carlson he’s willing to risk his life in a return to social normalcy to “save the country” for his grandchildren.