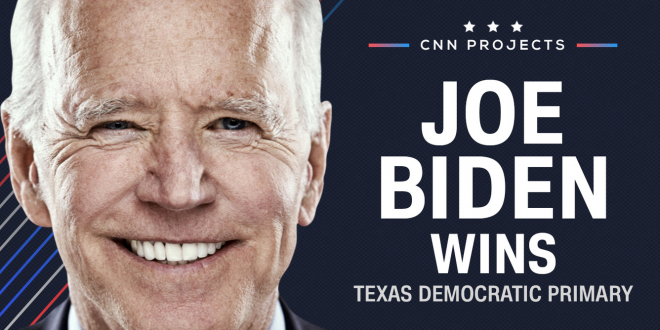 Joe Biden ended a triumphant Super Tuesday with a narrow victory over Bernie Sanders in Texas, the giant red state where Democrats are seeking a rare return to power in 2020. The former vice president’s victory over the Vermont senator capped a resounding and resurgent string of victories across the South for Biden, who won at least nine states but none bigger or more symbolic than Texas.

Just 24 hours earlier in Dallas, Biden mounted a display of force by the Democratic Party’s moderate wing — revealing endorsements by former rivals Pete Buttigieg, Amy Klobuchar and Beto O’Rourke. The primary put Texas’ fast-changing politics to the test and delivered some surprises. For Republicans, that included a rare loss for the Bush brand in the Lone Star State after Pierce Bush, a grandson of former President George H.W. Bush, failed to even make a runoff in a bid for Congress.

With 97% reporting, the race is called for Biden over Bernie in the Texas primary results:https://t.co/xE4yoR2u2B pic.twitter.com/vFOuN8kBp1