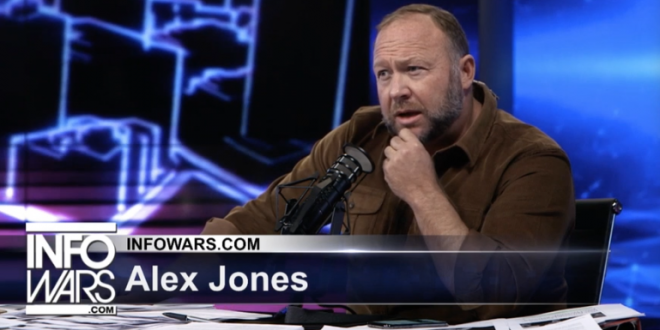 Austin-based conspiracy theorist Alex Jones was booked into the Travis County Jail on a charge of driving while intoxicated just after midnight Tuesday, the Travis County sheriff’s office said. Jones, 46, was booked at 12:37 a.m., said Kristen Dark, spokeswoman for the sheriff’s office. The driving while intoxicated charge is a class B misdemeanor, she said. His bail was set at $3,000 but he was released on bond at 4:11 a.m., Dark said.

Alex Jones is on air saying that he was arrested for a DUI last night, he is professing his innocence.

Jones showed some paperwork showing he was tested at just under .08 — in Texas you can still be charged with operating while intoxicated if you are under the limit but still impaired. Jones blamed his arrest on the fact he was in a hot tub earlier in the evening.

In other Alex Jones news, read my latest piece about how Alex Jones is claiming without evidence that the supplements he sells can prevent coronavirus: https://t.co/M9rzMRT5Pv