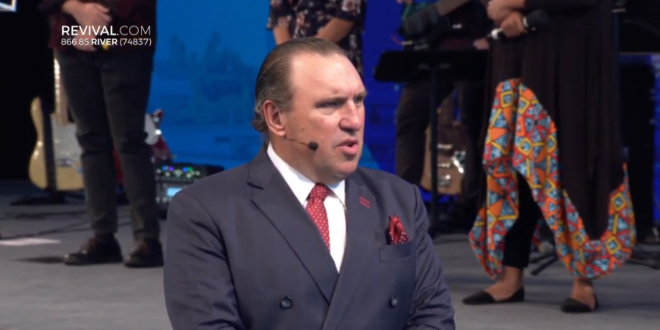 Scamvangelist Who “Laid Hands” On Trump: If You Love Jesus, He’ll “Supernaturally Multiply Your Toilet Paper”

“I believe that this is a time of supernatural sustenance. Every day, there will be multiplication. What you have in your hand will multiply.

“You’ll look at your toilet paper, and you’ll think, I’m gonna run out of toilet paper, but you have another roll where that other one was! You don’t know. How did that even take place? Are the toilet paper rolls getting together and having families now? What is taking place?

“And God really wants you to trust Him at this time. Are you with me?” – Rodney Howard-Browne, at today’s service held in defiance against advice against public gatherings.

RELATED: At 1:56:00 in the second clip below, Howard-Browne’s wife leads the congregation in a “Jericho shout” ordering the coronavirus “back to hell where you came from in Jesus’ name.” Everybody then stands up for 20 seconds of incoherent screaming.