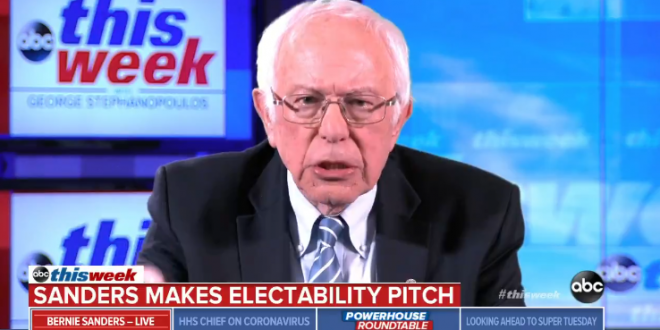 After Joe Biden won a decisive victory in Saturday’s South Carolina primary, his chief Democratic presidential campaign rival, Sen. Bernie Sanders, wasted no time in drawing contrasts with the former vice president, accusing him of ignoring the voters who could lead the way in defeating President Donald Trump. “In order to beat Trump, we are going to need the largest voter turnout in the history of this country,” said Sanders, I-Vt., on ABC’s “This Week” Sunday.

“And I don’t think you can do that unless you have a message that appeals to the working class and the middle class in this country, who have been ignored too long by the political establishment, of which Joe Biden is part of. We’ll see what happens on (Super) Tuesday. But my guess is, that we have an excellent chance to win some of the largest states in this country and states all across this country. because of the coalition we’re putting together because of the issues we’re talking about.”

“That’s absolutely untrue,” Bernie Sanders tells @GStephanopoulos when asked about Biden criticism that Sanders would be a “burden” for House and Senate candidates.

“We’re going to come together,” he adds, touting relationships with Pelosi and Schumer. https://t.co/wGwD0uWZ3e pic.twitter.com/zF7CidWjXH