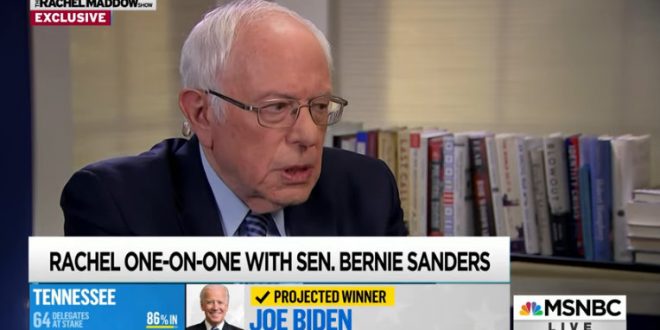 Sen. Bernie Sanders (I-Vt.) said Wednesday that he is “disgusted” by any personal attacks his supporters or anyone else has lobbed at his presidential primary opponent Sen. Elizabeth Warren (D-Mass.).

MSNBC’s Rachel Maddow asked Sanders about attacks some of his supporters have made, tweeting images of snakes and even calling for Warren to be challenged in a primary in her next Massachusetts Senate election.

Sanders told Maddow he was “actually disgusted” and “aghast” by online vitriol directed at Warren. “We condemn that,” Sanders said. “We want our supporters to be [talking] about the issues.

Previous Trump Denies Coronavirus Fatality Rate: I Think 3.4% Is A False Number, This Is Just My Hunch [VIDEO]
Next Amazon Battles Coronavirus-Related Price-Gouging