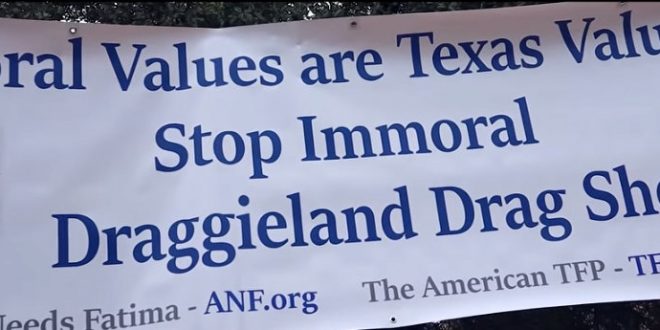 Via email from the red-caped Catholic Loons:

Texas is a God fearing state that cherishes moral values. That is precisely why dozens of students at Texas A&M organized a peaceful protest against the first drag queen show hosted on campus called “Draggieland.”

The exhibit of moral depravity was opposed by a coalition of Catholic students and volunteers of Tradition Family Property (TFP)–Texas on February 19, 2020. While students prayed the rosary, pro-homosexual advocates yelled, cursed and screamed blasphemies against God.

Fifty Catholics stood shoulder to shoulder, rosaries in hand, holding signs conveying clear messages: “A moral wrong can never be a civil right,” “Mary, save us from the sexual revolution,” and “drag show is not a Texas value.”

Some eighty counter-protesters gathered across the square. With signs such as “love is a human right,” or “get your hate out of my state,” they certainly did not practice what they preached. Over a loud megaphone, rainbow-waiving students screamed vulgar insults. “F— you” was their most common chant.

At one point, two men walked in front of the Catholic group and committed indecent acts. Loud rap music was also blared from the megaphone in an attempt to block out the prayers of the Rosary. All this served as a good lesson: The homosexual movement hates prayer.