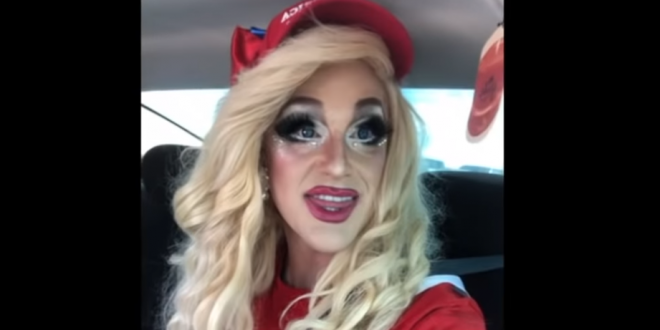 A veritable carnival of characters turned out this week for the movement’s biggest annual confab, the Conservative Political Action Conference at the swanky National Harbor resort just outside Washington.

In the cavernous convention center, Trump superfans in 10-gallon hats mingled with student rabble-rousers and an army of wonks from the swamp’s countless conservative think tanks.

“What brings me here is my love of America and my inspiration and enthusiasm for President Trump,” declared a strapping 6-foot drag queen who identified herself only as Lady MAGA. “I would like to defy the narratives that all conservatives and Trump supporters are bigoted, homophobic people.”

In the video below with notorious white supremacist Nick Fuentes, Lady MAGA declares that she “agrees with 90%” of his beliefs. Among those beliefs are that diversity is a code word for anti-white and that the First Amendment does not apply to Muslims. Fuentes attended the infamous 2017 Nazi rally in Charlottesville.

He was brutally attacked by #AntifaTerrorists and continues to expose them.

WE MUST BE JOYFUL! POSITIVE!

I met a British #trumpsupporter @CPAC who had some words of warning for the American people.

My fellow Americans don’t need to pay for my choice to waste money on liberal brainwashing in college.

Ilhan NOmar, you are the 🗑 https://t.co/Skbifu3jTB

So excited for @CPAC tomorrow!