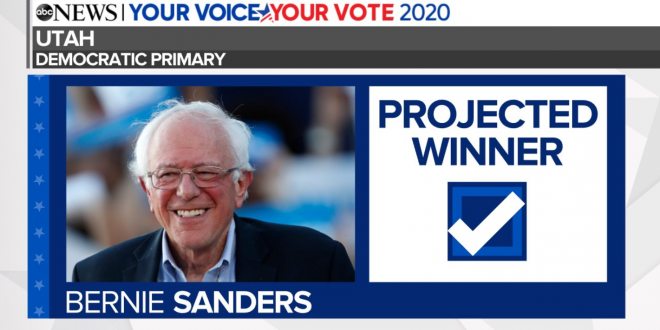 Despite late efforts by moderates to combine forces against him, liberal Vermont senator and self-proclaimed democratic socialist Bernie Sanders jumped out to an early lead Tuesday in Utah’s Democratic presidential primary.

As early results showed Sanders with a lead of 32.7% of the vote shortly after polls closed, a group of more than a dozen supporters at an election watch party and potluck at the Teamsters & Chauffeurs Union in West Valley City erupted in cheers. “Bernie! Bernie! Bernie!” they chanted.

#BREAKING: Bernie Sanders will win the Utah Democratic primary, ABC News projects, based on analysis of the vote. https://t.co/ICASlYhpdq pic.twitter.com/HIwDRPC01d