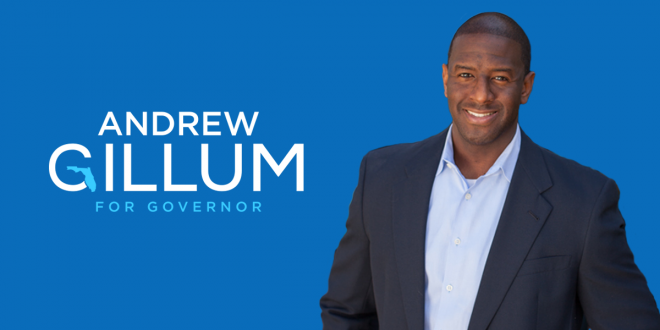 According to a police report, Miami Beach Fire Rescue crews were called to a hotel at 1100 West Avenue shortly before 1 a.m. regarding a suspected drug overdose.

According to the police report, officers found three small clear bags inside the hotel room containing suspected crystal meth. The suspected narcotics were impounded as evidence. Authorities said Gillum left the hotel room and returned to his home “without incident.”

Miami Beach police responded to a cardiac-arrest distress call just before 1 a.m. at the luxe Mondrian South Beach hotel. When two MBPD officers arrived, they noted that Miami Beach Fire-Rescue was already on scene treating a man named Travis Dyson for a possible drug overdose, but he was in stable condition.

The officers stated that one of the men involved in the incident, Aldo Mejias, had lent Dyson his credit card information to rent a hotel room yesterday afternoon. The two men were supposed to meet later that day.  Mejias told the officers that he arrived at the hotel room around 11 p.m.

The report also said that Fire-Rescue responded a second time to the hotel for a welfare check on Gillum and determined he was in stable condition and his vital signs were normal.

A call to Gillum’s longtime spokesman and adviser Friday morning went directly to voice mail and he didn’t immediately respond to a text message.

A longtime supporter of Gillum’s, state Rep. Shevrin Jones, D-West Park, said Friday morning he knew nothing except an image he saw on Twitter of a police report. He said he hasn’t been in touch with Gillum in the last day.

Gillum married his wife in 2009 and has three children. He lost the 2018 gubernatorial election to Ron DeSantis by less than half a point. He’s currently a paid contributor for CNN.