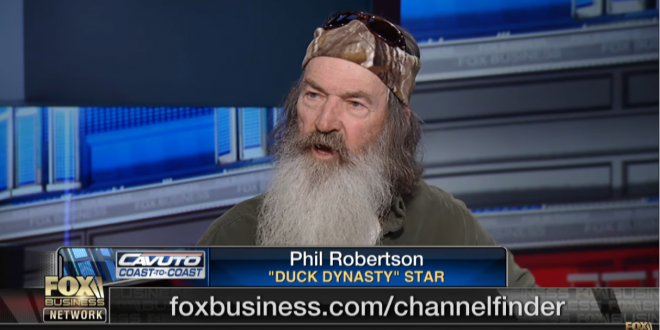 This week, Duck Dynasty’s Phil and Kay Robertson endorsed the Freedom March, where former homosexuals march proclaiming freedom from homosexuality through Jesus Christ. “According to Jesus Christ, the greatest command in the Bible is to love God with all your heart, mind and strength and to love your neighbor as yourself,” Phil says. “We should live by that. I am grateful to all who share their stories from their hearts at the Freedom March.”

Mrs. Kay agrees: “I love hearing the stories about God’s love and grace. It the greatest blessing on this earth, and heaven will be the greatest gift of all.” The next Freedom March will be in Boston, Massachusetts, on April 18, 2020, at Christopher Columbus Park from 12-4 p.m. The Freedom March will include about 10 testimonies, live worship from Edward Byrd and marching around downtown Boston.

Robertson last appeared on JMG in 2019 when he declared that he doesn’t need universal healthcare because Jesus will raise him from the dead.