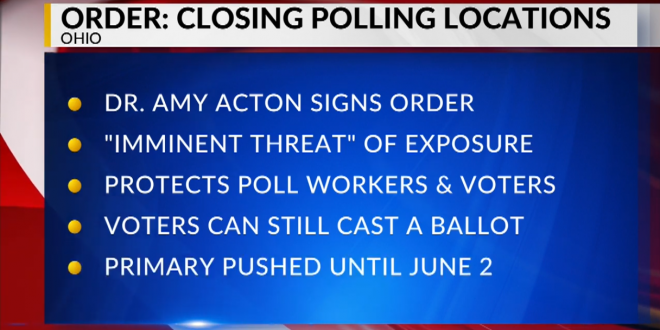 For real this time: There is no Ohio primary Tuesday. Early Tuesday, the Ohio Supreme Court denied a legal challenge to the state delaying the primary. A candidate in Wood County filed the action alleging the delay of the primary violated election laws.

Only four justices participated in the ruling, which was issued without an opinion. The ruling capped a chaotic 12 hours in which it appeared the election was off, back on, and then off again.

Late Monday night, Ohio Department of Health Director Dr. Amy Acton ordered Tuesday’s polls closed as a health emergency. She added, “To conduct an election at this time would force poll workers and voters to face an unacceptable risk of contracting COVID-19.”