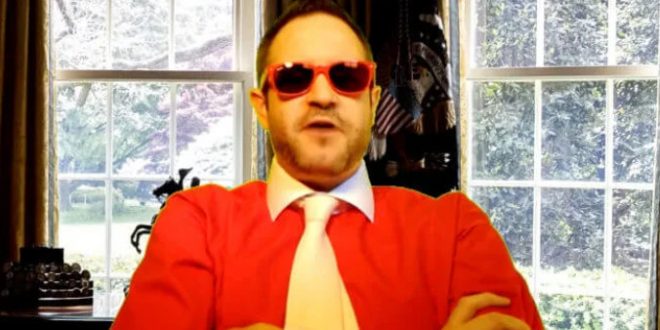 White supremacist Robert Sterkeson has been identified as the man who briefly displayed a swastika flag at Sen. Bernie Sanders’ presidential campaign rally in Arizona on Thursday. Sterkeson has been known as an extremist for more than a decade​; he operates an obscure anti-Muslim hate group.

Sterkeson was reportedly first identified by​ Imraan Siddiqi​, executive director of the Council on Islamic Relations-Arizona, and his identity was confirmed by antifascist researchers online, who located records of similar anti-Jewish stunts that Sterkeson had performed in the past​, ​as well as an online profile where Sterkeson took credit for Thursday’s display.

The Anti-Defamation League reported that Sterkeson “frequently targets Jews” and Muslim communities for his self-described “stunt” activism, and that Sterkeson has spoken positively of Robert Bowers, the man charged with murdering 11 worshipers at the Tree of Life Synagogue in Pittsburgh in 2018.

The perpetrator has self-identified as Nazi YouTuber Robert Sterkeson through his channel.

“This is me at a Bernie Sanders rally unfurling the Swastika behind him right as he came out. Footage on tomorrow’s episode!” wrote Sterkeson through a post on the channel.

We’re ready to call it. So who’s a Nazi POS who likes to fly swastika flags and harass Jewish people on the regular? Robert Sterkeson of https://t.co/GxPLqwXgMF
There is a video of him doing so at a Jewish National Fund conference. https://t.co/QtzbUGlFDD pic.twitter.com/hWofu523gH