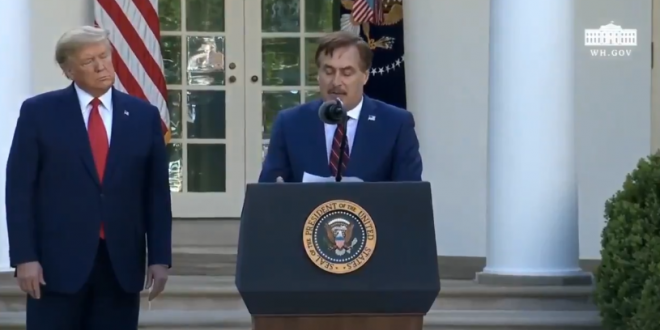 President Donald Trump introduced those tuning into his nightly coronavirus task force briefing on Monday to a special guest: Mike Lindell, the multimillionaire inventor and CEO of the MyPillow empire.

“Boy, do you sell those pillows,” Trump said, asking him to step up to the mic and tell Americans how his company was helping them deal with the outbreak.

It’s hardly their first encounter. Lindell has told associates that the president is encouraging him to run for governor of Minnesota in 2022, to “keep Minnesota red beyond” the 2020 race, according to a person with direct knowledge of his comments.

MyPillow Guy In The Rose Garden:

“God gave us grace on November 8, 2016, to change the course we were on. God had been taken out of our schools & lives, a nation had turned its back on God. I encourage you to use this time at home to get back in the word. Read our Bibles…” pic.twitter.com/RvvCFlotaG