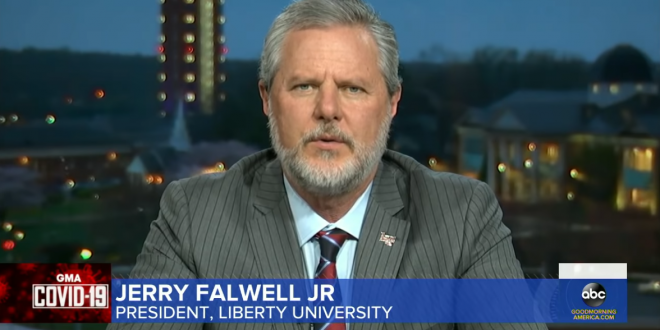 Mr. Falwell — a staunch ally of President Trump and an influential voice in the evangelical world — reopened the university last week, igniting a firestorm, epidemiologically and otherwise.

As of Friday, Liberty’s student health services Dr. Edward Eppes said, nearly a dozen Liberty students were sick with symptoms that suggest Covid-19, the disease caused by the virus. Three were referred to local hospital centers for testing. Another eight were told to self-isolate.

“Liberty will be notifying the community as deemed appropriate and required by law,” Mr. Falwell said in an interview on Sunday when confronted with the numbers. He added that any student returning now to campus would be required to self-quarantine for 14 days.

Liberty officials accuse outsiders of playing politics. Within the school, there are signs of panic. “I’m not allowed to talk to you because I’m an employee here,” one student living on campus wrote in an email. But, he pleaded, “we need help to go home.” https://t.co/ghj436i5Ih