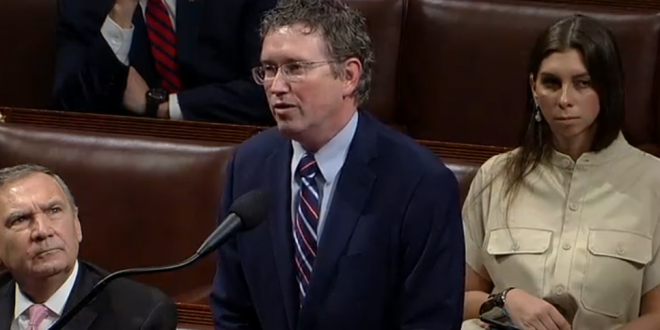 The vote was called for and Massie made his move. “I came here to make sure our republic doesn’t die by unanimous consent,” Massie said. When Massie made his request to hold a roll call vote, Rep. Anthony Brown, the presiding officer in the speaker’s chair pointed out that not enough members rose to back his request. House rules require one-fifth of lawmakers to stand up in support.

Massie then protested, saying there is not a quorum of lawmakers present. Brown counted the lawmakers seated in the chamber and galleries. He ruled there is a quorum and thereby denied Massie’s request for a roll call vote. “A quorum is present. The motion is adopted,” he ruled. The lawmakers in the chamber gave a standing ovation. Massie also was a vocal defender of the president’s during the impeachment inquiry.

Rep. Thomas Massie tried to get a recorded vote and hold up the stimulus bill.

Because of Thomas Massie, there will have to be 216 members in chamber to establish a quorum – far in excess of the CDC guidelines against gatherings of 10 or more. The quorum needs to be present to deny him a sufficient second on a recorded vote. Then stimulus will pass by voice

JUST IN: The US House of Representatives votes in favor of a historic $2 trillion coronavirus stimulus package, clearing the way for President Trump’s signature. https://t.co/kFmwT8PA03