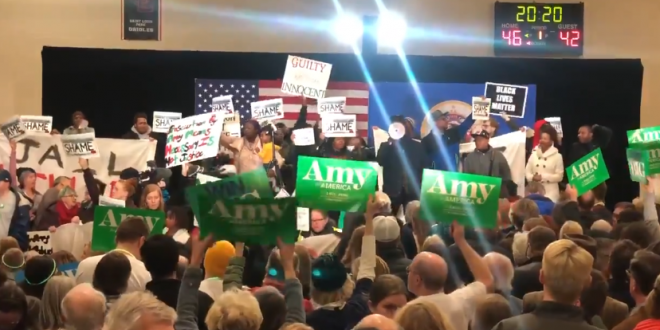 Sen. Amy Klobuchar canceled a rally in her home state Sunday night as several dozen protesters chanted “Black Lives Matter,” “Klobuchar has got to go” and “Free Myon” — referencing the case of a black teenager convicted of murder after a flawed police investigation.

According to videos that emerged on social media, the senator’s rally was set in St. Louis Park, Minn., at a local high school. WCCO-CBS Minnesota reported that the protesters made their way into the rally and on stage, where they continued chanting. After a 40-minute delay, the rally was canceled.

ST. LOUIS PARK, MN — Protesters in Senator Klobuchar’s home state have stormed the stage at her campaign rally, with dozens chanting, “Free Myon!” and “Klobuchar has got to go!” pic.twitter.com/n0MLZK3mO7

Protesters chanting “Black Lives Matter” and “Free Myon” have now occupied Senator Amy Klobuchar’s rally for well over an hour, taking over the stage and effectively shutting down the campaign event.

The rally in Klobuchar’s home state was slated to begin ten minutes ago. pic.twitter.com/B0iTyExXQ0

Previous RNC And Trump Raised $86 Million In February
Next FRANCE: Louvre Closed Due To Staff Fears About Virus