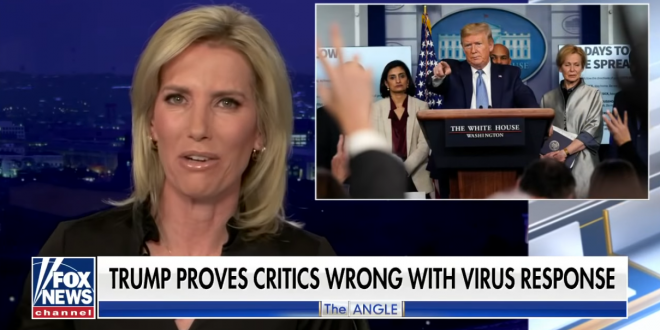 Ingraham: The Media Is Enjoying The Coronavirus Crisis

“The media, some have been enjoying this moment that has brought great inconvenience, disruption and suffering to American workers and families, let alone all the health challenges, the deaths and the infection rate — because some people think it’s Trump’s downfall, and they are cheering that on as they did during Mueller and all these other crises.

“But as you will see later, the left doesn’t have a great response here. Testing snags notwithstanding, Trump has mobilized an aggressive effort to tackle this. The Democrats answer is usually that, well, we should just do what Europe does. Well, okay. Right now, Europe is closing its borders. Canada and others are closing their borders as well.

“And as I was telling you, even countries like Kyrgyzstan are doing thermal visor checks at airports. So, it’s worth remembering that when Trump shut down travel from China, remember who was out there criticizing him.” – Laura Ingraham, on last night’s show.