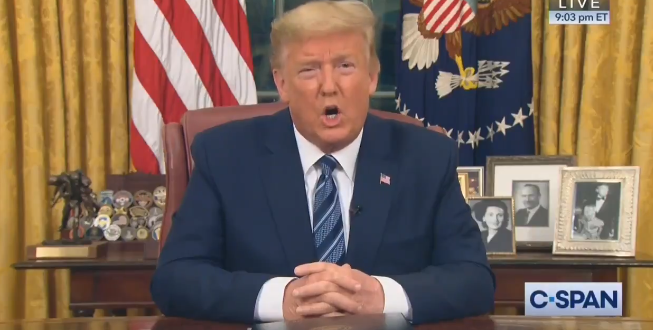 How Trump Screwed Up His Coronavirus Address

In the most scripted of presidential settings, a prime-time televised address to the nation, President Trump decided to ad-lib — and his errors triggered a market meltdown, panicked travelers overseas and crystallized for his critics just how dangerously he has fumbled his management of the coronavirus.

Even Trump — a man practically allergic to admitting mistakes — knew he’d screwed up by declaring Wednesday night that his ban on travel from Europe would include cargo and trade, and acknowledged as much to aides in the Oval Office as soon as he’d finished speaking, according to one senior administration official and a second person, both with knowledge of the episode.

Trump’s 10-minute Oval Office address Wednesday night reflected not only his handling of the coronavirus crisis but, in some ways, much of his presidency. It was riddled with errors, nationalist and xenophobic in tone, limited in its empathy, and boastful of both his own decisions and the supremacy of the nation he leads.