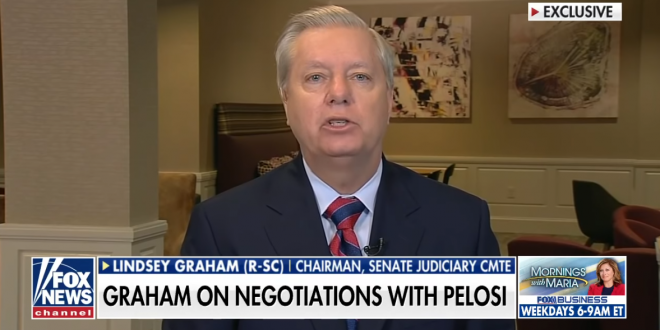 Graham Rages At Pelosi: Blaming Trump For Deaths Is “The Most Disgusting Political Statement In History”

Sen. Lindsey Graham on Sunday railed against Speaker Nancy Pelosi (D-Calif.) after she said President Trump’s response to the coronavirus outbreak was having deadly consequences.

“She’s blaming the president of the United States for people dying because of the way he’s led the country,” Graham, a vocal Trump ally, said on Fox News’ “Sunday Morning Futures.” “That’s the most shameful, disgusting statement by any politician in modern history.”

Graham accused Pelosi of being the “the first politician to blame another politician for people dying,” claiming that the pandemic had brought out the “best of America from our citizens.”

Lindsey Graham is back on TV to complain that people in his own state will get more money in unemployment benefits which will make it difficult for Amazon and Walmart to pay them low wages pic.twitter.com/PX0U6vtup2

Previous Falwell Lied About Support For Reopening Liberty U
Next Trump Boasts About His TV Ratings As Virus Rampages: My Numbers Are Better Than The Bachelor And The NFL