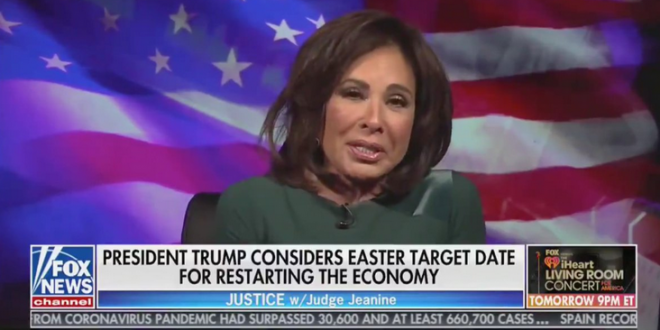 Fox News issued a statement on Sunday blaming “technical difficulties” for the spectacle and seeking to excuse the mishaps by pointing out that it, like others in such challenging times, was operating “with a reduced staff working remotely to ensure the health and safety of our employees”.

Pirro defended herself in a lunchtime tweet that claimed her hair was out of place because of an audio device in her ear with “no staff around to notice”.

The explanations cut little ice with social media users, however, several of whom suggested alternative reasons for what they saw. Pirro, 68, told another Twitter user: “Keep hating. U wear it well.”

Beyond parody. You can actually see Jeanine Pirro putting down her drink at the top of her show tonight…which was delayed due to “technical difficulties”. pic.twitter.com/5hOC11BFtM

No that’s an ifb grabbing my hair and no staff around to notice. I was in a truck where that was not prepared to broadcast bec we had no connection , no visual and no teleprompter.

Keep hating. U wear it well.

Previous Trump Boasts About His TV Ratings As Virus Rampages: My Numbers Are Better Than The Bachelor And The NFL
Next Cuomo: Trump’s Quarantine Threat “Panicked People”