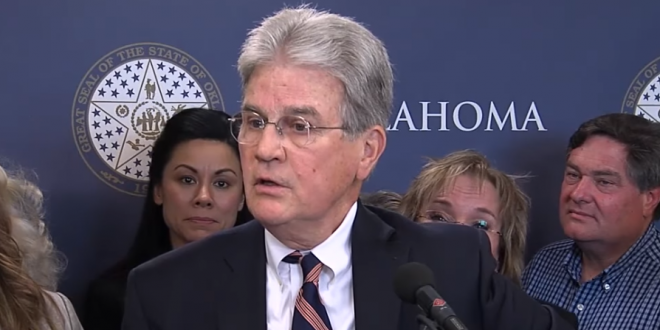 Former U.S. Sen. Tom Coburn, a physician who became a powerful force in Congress on fiscal matters, died early Saturday morning after a long fight with prostate cancer. He was 72.

Coburn, of Muskogee, served in the Senate from 2005 to 2015 and in the U.S. House of Representatives from 1995 to 2001. After leaving the Senate, he pushed for a constitutional convention and advocated for a range of conservative fiscal causes.

A statement from Coburn’s family on Saturday morning said, “Because of his strong faith, he rested in the hope found in John chapter 11 verse 25 where Jesus said, ‘I am the resurrection and the life. The one who believes in me, will live, even though they die.’ Today he lives in heaven.”

Coburn sometimes appeared on JMG over the years for his decidedly un-Christian wishes of physical harm to those he opposed.

For example, in 2009 he called for prayers that Senators who supported health care reform would fail to show up for a critical vote, presumably due to an accident, illness, or death. (In fact, his own fellow GOP Oklahoma senator, James Inhofe, missed that vote.)

In 2011, he declared that Senate Democrats were just lucky that he wasn’t allowed to carry a gun into the chamber, going on to say that the health care system was better back when patients paid their doctors with chickens.

Coburn was a climate change denialist, anti-abortion rights, anti-Obamacare, pro-NRA, and voted against every LGBT rights measure. Despite all of that, he maintained a personal friendship with President Obama, who was elected to the Senate with him in 2004.

After leaving the Senate, he joined the far-right Manhattan Institute, which advocates against labor unions, pensions for public employees, public schools, and pretty much any program remotely associated with the evils of socialism.

Previous Scamvangelist Who “Laid Hands” On Trump Won’t Stop Services: We Have “13 Machines To Shoot Down Virus”
Next Terror Charge In PA Grocery Store Coughing Incident