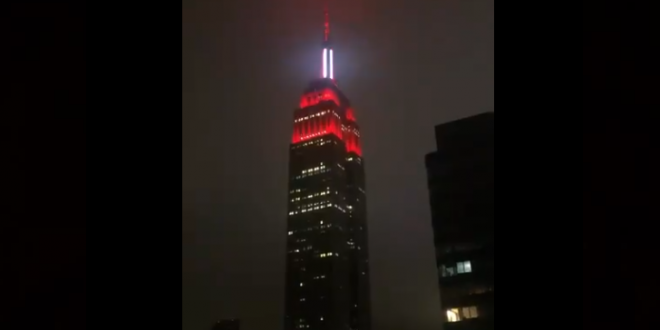 The Empire State Building has turned all the colors of the rainbow for many occasions but when it turned into a blaring red beacon on Monday night, the message was clear: New York is under the state of emergency.

The building’s owner, Empire State Realty Trust, says the tower of the iconic New York City landmark will turn red each night and spin to pay tribute to all the heroes on the frontline of the coronavirus epidemic.

Some say the tribute to first responders and health care workers is a nice gesture and some found giant emergency signal eerie. Others had mixed feelings, as one person puts it: “Can’t decide if the ‘Red Alert’ is gorgeous or terrifying.”

New York’s Empire State Building was lit up like an ambulance siren on Monday night in tribute to medical workers fighting coronavirus.

The Empire State Realty Trust said the lights symbolized “America’s heartbeat and a siren of red and white”. https://t.co/sK9NGk0fgE pic.twitter.com/SuZa16b8EG

NYC right now. The Empire State building lights are pulsating like a heart, the ambulances are incessant. This feels like something out of a movie. pic.twitter.com/23DjEbA1vm

On the right is the red siren in the fog that has become the top of Empire State Building to honor emergency workers. In the water on the left, the blue sirens from boats guarding the USNS Comfort. pic.twitter.com/FzFOiXQ2gU