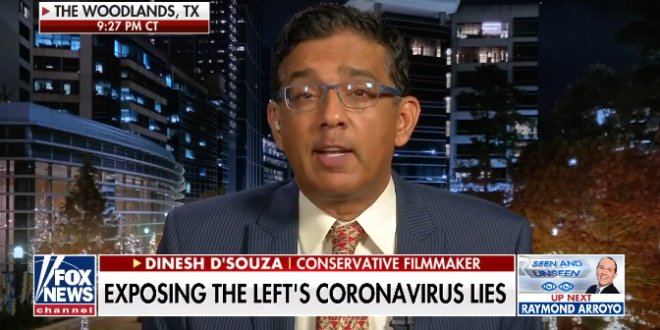 D’Souza: Blue States Have Called Trump A Racist For Four Years And Now They Expect His Help [VIDEO]

“Remember that a few weeks ago, Jennifer Rubin, the Never Trumper, and others were all putting out the idea that there was so much misinformation being put out by the president, and by Fox News, that we would see spreads of the coronavirus in the red states — Republicans would die.

“But in fact, interestingly, these spreads are mainly in the blue states. And what I find kind of interesting is you have these blue state governors and mayors, and they are trying — they’re criticizing Trump, but they also have the outstretched hand. They want Trump to intervene.

“The same guy that they’ve been calling a racist and a fascist for four years, and now they want the racist and the fascist to step in and help them out. You’d think that if a racist and fascist was the guy they needed, they’d prefer to go it alone.” – Dinesh D’Souza, last night on Fox News.

In 2018 D’Souza was pardoned by Glorious Leader for his 2014 felony campaign finance conviction, for which he served eight months in a halfway house.