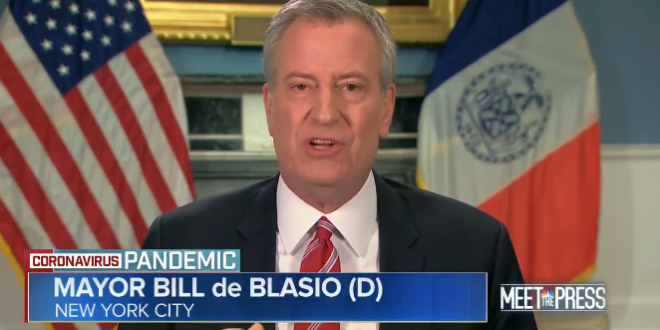 New York City Mayor Bill de Blasio sharply criticized President Donald Trump’s response to the coronavirus pandemic Sunday, arguing that the federal government has not done enough to ramp up production of life-saving medical supplies like masks and ventilators and asking the president to deploy the military across the country to help with the public-health crisis.

“The president of the United States is from New York City and he will not lift a finger to help his hometown and I don’t get it. I don’t get it. Right now, I have asked repeatedly for the military to be mobilized, for the Defense Production Act to be used to its fullest to get us things like ventilators, so people can live who would die otherwise,” de Blasio said Sunday on a special edition of NBC’s “Meet the Press.”

WATCH: @NYCMayor says “if the president doesn’t act, people will die who could have lived otherwise.” #MTP #IfItsSunday

Mayor de Blasio: “If there are ventilators being produced anywhere in the country, we need to get them to New York … in the next 10 days.” pic.twitter.com/TseexRZD42