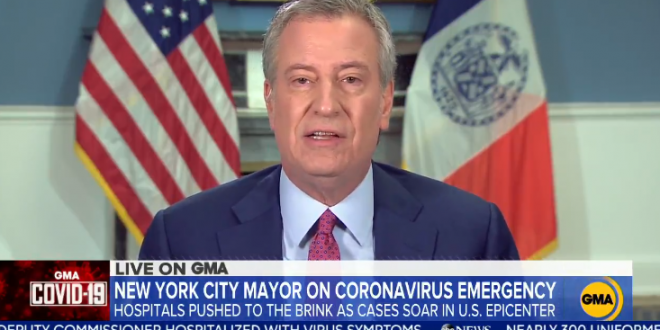 De Blasio: Expect NYC To Remain Closed “Through May”

New Yorkers should be prepared for the city to remain in “pause” due to coronavirus through May even as President Trump gives Americans “false hope” the country will reopen by Easter next month, Mayor de Blasio said Friday.

“We have to be ready for that and I think it’s going to spread in the country,” de Blasio said when asked if the city would be closed through May on ABC’s “Good Morning America.”

“This idea of Easter is, unfortunately, a false hope. It would be better for the president to be blunt with people that we’ve got a really tough battle ahead.”

“We believe over half the people in this city will ultimately be infected.”
New York City Mayor @billdeblasio tells @GStephanopoulos that “we have be ready” for NYC to be closed through May. https://t.co/Y7dKQRF9le pic.twitter.com/XJqx013ahO

New York City Mayor @billdeblasio tells @GStephanopoulos the state has received 2,500 new ventilators in the last week but many more are needed. He said the state will need 30,000 and NYC alone needs 15,000. https://t.co/Y7dKQRF9le pic.twitter.com/5zTfPcrMLC