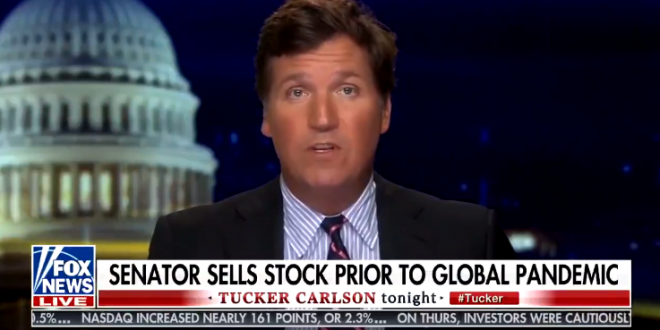 Carlson: Sen. Burr Should Resign And Be Prosecuted

Conservative Fox News host Tucker Carlson called on Sen. Richard Burr (R-N.C.) to resign after reports that he sold off millions in personal stocks the week before the stock market began its steep dive amid fears of the COVID-19 outbreak.

“He didn’t give a prime time address, he didn’t go on television to sound the alarm,” Carlson said, pointing out that Burr wrote an op-ed days earlier with a much less dire message about the impact of the virus on U.S. life. Carlson then called for Burr’s resignation and prosecution for his actions.

“Maybe there’s an honest explanation for what he did; if there is, he should share it with the rest of us immediately,” Carlson said in a Thursday night segment on Fox News. “Otherwise, he must resign from the Senate and face prosecution for insider trading.”

Tucker Carlson calls for Senator Burr to resign and await prosecution for insider trading if he cannot provide a reasonable explanation for his actions. He goes on to say it appears that Senator Burr betrayed his country in a time of crisis pic.twitter.com/q7yJa5wjuA