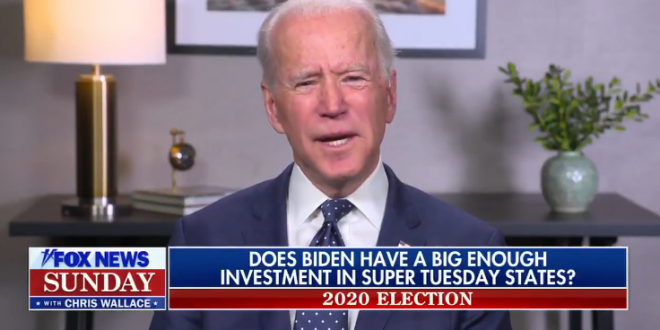 Joe Biden, fresh off his big South Carolina win, appeared on multiple Sunday show today, including Fox News Sunday for his first interview with Chris Wallace since 2007. And while South Carolina was a significant victory for Biden after poor showings in earlier states, Wallace said, “Frankly, you’re at a big disadvantage going into [Super Tuesday].”

He asked Biden directly, “If you get clobbered on Super Tuesday, what does that do to your campaign?”

“It surely doesn’t help, but there’s a lot of big states coming up after that,” Biden said. “A whole range of states that are still in play.” He expressed optimism about people responding to his message after last night, with his campaign apparently raising $5 million in one day.

“No, this is Chris,” Wallace says

“I just did these back to back,” Biden explains apologetically (he also taped MTP)

On FOX News Sunday, Joe Biden reacts to his first victory in the Democratic primary. More states are at play on Super Tuesday. Joe Biden reacts to the competition and Mike Bloomberg’s big-bucks: “Money can buy a lot.”…”It can’t hide your record.” #FNS #2020 #Politics pic.twitter.com/CTLgewLpgH