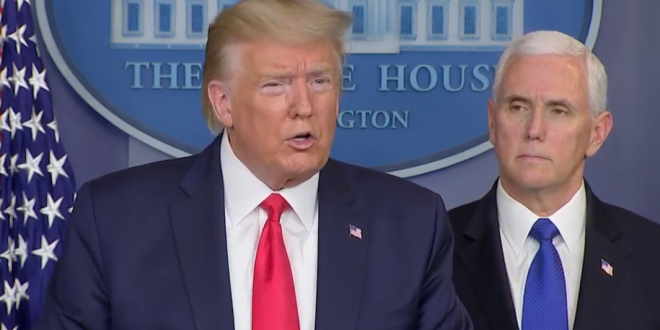 President Trump and some of his senior officials are losing patience with the doctors’ orders. Amid dire predictions for jobs and the economy, the White House is beginning to send signals to business that there’s light at the end of the tunnel — that the squeeze from nationwide social distancing won’t be endless.

Vice President Pence, who heads the White House’s Coronavirus Task Force, had signaled the change in tone earlier when he said the CDC will issue guidance today allowing people exposed to the coronavirus to return to work sooner by wearing a mask for a certain length of time.

Trump is responding both to his own instincts and to messages that key outside allies have been sending for days. He retweeted a number of those outside allies echoing similar stances on Monday morning.

WE CANNOT LET THE CURE BE WORSE THAN THE PROBLEM ITSELF. AT THE END OF THE 15 DAY PERIOD, WE WILL MAKE A DECISION AS TO WHICH WAY WE WANT TO GO!

15 days. Then we isolate the high risk groups and the rest of us get back to work before it’s all over for everyone!! #Landslide2020

The fear of the virus cannot collapse our economy that President Trump has built up.

We The People are smart enough to keep away from others if we know that we are sick or they are sick!

After 15 days are over the world can begin to heal!

Previous Dr. Anthony Fauci On Trump’s Misinformation: I Can’t Jump In Front Of The Microphone And Push Him Down
Next Federal Reserve Moves To Shore Up Financial Markets