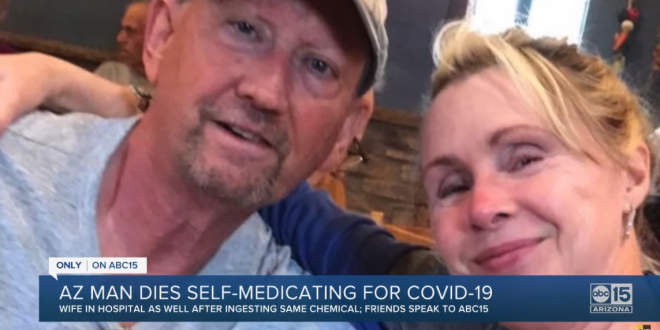 An Arizona man has died after ingesting chloroquine phosphate — believing it would protect him from becoming infected with the coronavirus. The man’s wife also ingested the substance and is under critical care. The toxic ingredient they consumed was not the medication form of chloroquine. Instead, it was a parasite treatment for fish.

The man’s wife told NBC News she’d watched televised briefings during which President Trump talked about the potential benefits of chloroquine. Even though no drugs are approved to prevent or treat COVID-19, the disease caused by the coronavirus, some early research suggests it may be useful as a therapy.

The name “chloroquine” resonated with the man’s wife, who asked that her name not be used to protect the family’s privacy. She’d used it previously to treat her koi fish. “I saw it sitting on the back shelf and thought, ‘Hey, isn’t that the stuff they’re talking about on TV?'”

According to the woman, after watching Trump’s briefing she and her husband mixed the fish tank cleaner with a liquid and drank it. Doctors say she survived because she threw up shortly afterwards.