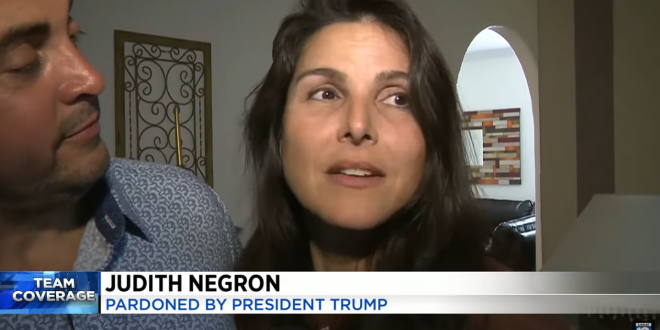 Woman Convicted In $205M Medicare Kickback Fraud Scheme: President Trump Has Given Me My Life Back

A woman who served nearly a decade behind bars for her role in a health care and money laundering scheme returned to Miami-Dade County early Wednesday morning. President Donald Trump on Tuesday commuted the prison sentence of Judith Negron, who was serving time for her role in a $205 million Medicare fraud scheme back in 2011.

Negron, now 48, was found guilty of numerous felony counts as one of the owners of mental health care company American Therapeutic Corporation. She was also ordered to pay over $87 million in restitution.

Prosecutors said dating back to 2002, Negron and fellow owners Lawrence S. Duran and Marianella Valera paid bribes and kickbacks to owners and operators of assisted living facilities and halfway houses and to patient brokers in exchange for delivering ineligible patients to their facilities.

“I am so thankful, so blessed. This is still a miracle that I am trying to understand,” she told Local 10 News reporter Glenna Milberg. “I am just finding out now how many people were involved in this,” Judith Negron said. “President Trump has given me my life back.”

Hector Negron said he initially thought the call Tuesday from the White House was actually a telemarketer. “I decided to listen to the message around 3 o’clock and I hear that it’s the White House calling me and that they want to talk to me,” he said.

Just a reminder that when the DOJ handed down this sentence in 2011 they said this was “…one of the largest fraud schemes ever prosecuted by the Medicare Fraud Strike Force.”https://t.co/CuPKnLKdOc