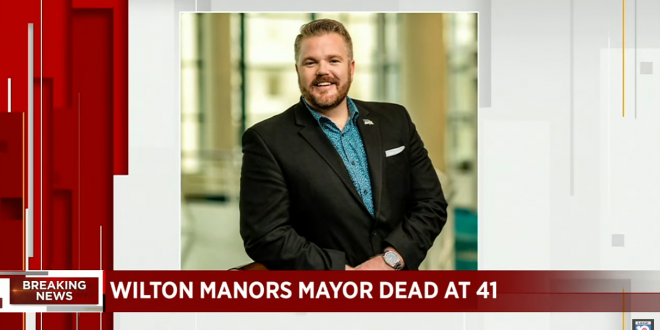 Justin Flippen, the mayor of Wilton Manors, died suddenly Tuesday. Flippen was 41. He was elected mayor in 2018 after serving as a city commissioner. City officials said that Flippen apparently was driving to Tuesday evening’s City Commission meeting when he became ill and died.

“We were notified that Justin apparently was on his way to the City Commission meeting and they had to rush him to the hospital and he passed away at the hospital,” said Commissioner Gary Resnick, who served as mayor before Flippen. He was a candidate for re-election in November.

“Justin was a great kid. I’ve watched him grow up from a 20-something legislative aide to the mayor of Wilton Manors. He was engaged. He was getting married. He was so full of hope for the future. I’m just devastated,” said Stacy Ritter, president and CEO of the Greater Fort Lauderdale Convention and Visitors Bureau, where Flippen worked.

When Flippen was elected mayor in 2018, he became part of the nation’s second-ever all-LGBT city government. The first was Palm Springs.

We are deeply saddened to share that Mayor Justin Flippen passed away earlier this evening. Please respect Mayor Flippen’s memory, family members, friends, & our entire community that is mourning by allowing the City to provide official information via https://t.co/GYrt60EMZb. pic.twitter.com/TOYooiLtiq

#TeamPete family, it’s with great sadness that we inform you of the passing of the wonderful mayor of Wilton Manors, @justinflippen . Justin endorsed @PeteButtigieg and was an ardent supporter. Our sincere condolences to his family and friends. https://t.co/fAJI8M2KfQ

Like all of us who knew him, I am devastated by the news of Justin Flippen’s passing. Justin was a fine public servant, a wonderful person, and a dear friend. My thoughts are with his family as we all mourn this tragic loss. May Justin rest in peace. https://t.co/eL7Woc4xFR

I am saddened tonight by the news of the sudden passing of my fellow mayor, @justinflippen of Wilton Manors. Justin had a passion for public service and was helping lead a new generation of LGBT leaders in the greater Fort Lauderdale community. He will be deeply missed. pic.twitter.com/7bpzK5W5Kr

Sad to learn of the death of Mayor Justin Flippen, Wilton Manors, FL. We exchanged texts just last week as he told me he planned to run for another term. RIP. pic.twitter.com/5Apk4Km10N

Justin Flippen, the mayor of Wilton Manors, died suddenly yesterday. He was only 41. https://t.co/s22LR827SR pic.twitter.com/3zXszeLJBq

Previous CHATTER AWAY: Overnight Open Thread
Next Sanders Weathers Attacks From All At Chaotic Debate