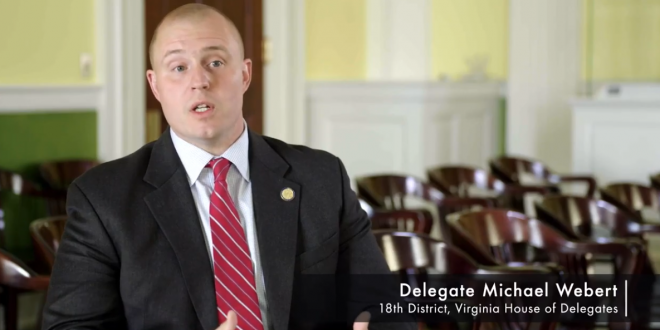 Democrats walked off the floor of the House of Delegates Tuesday morning as the pastor invited to give the opening prayer delivered stinging remarks condemning abortion and gay marriage and said God would bring his “wrath” against those who don’t follow biblical principles.

“Is this a prayer or a sermon?,” a delegate yelled from the Democratic side of the chamber as the prayer turned increasingly political.

Speaker Eileen Filler-Corn, D-Fairfax, ultimately ended the prayer by banging her gavel and moving right into the Pledge of Allegiance. Democrats were sharply critical of the prayer’s tone, calling it a breach of the normal protocols for guest clergy.

Read the full article. According to a tweet below, the pastor was invited by GOP Del. Michael Webert [photo], a cattle rancher who was first elected in 2011. The pastor is the author of an e-book titled The Truth About Tithing.

Lots of Va. House Dems walking off the floor during the opening prayer after the pastor starts explicitly attacking abortion, saying it could invite God’s wrath

“Is this a prayer or a sermon?” someone shouts from Dem side pic.twitter.com/Zto7IuEoAA

Dems are furious. Trying to figure out who invited the pastor

The details on the prayer pic.twitter.com/eZjHPJEDBm

A guy with the pastor that gave the opening House prayer today asked reporters if they were aware “sodomy” was once considered an offense worthy of capital punishmenthttps://t.co/EKKs2g9UKB

“Most of the clergy that come here have been very respectful of the opportunity extended to them. And every now and then you get someone that goes off the rail,” said Del. Luke Torian, D-Prince William.https://t.co/EKKs2g9UKB