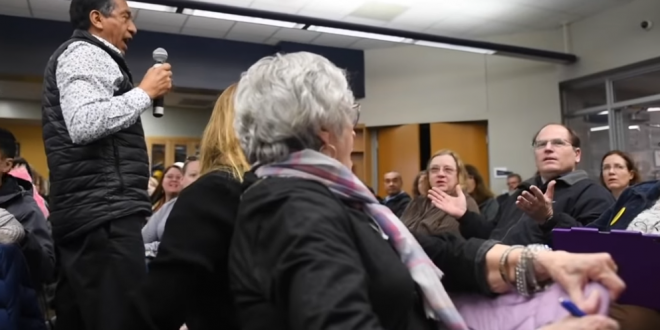 A conversation about diversity, equity and inclusion at Saline Area Schools quickly turned volatile Monday morning when one parent asked another why he didn’t “stay in Mexico.”

For a community looking to heal and build unity after an incident involving racist messages shared among students via Snapchat, the exchange caught many in attendance off guard. During the community meeting Monday, Feb. 3, parent Adrian Iraola spoke about his son enduring racist name-calling by students in the district and the impact it had on him.

The names taco, enchilada and nacho provided fuel for his son, Iraola said, motivating him to eventually earn a master’s degree from Johns Hopkins University. “I remember when I went to his bedroom to say good night and he was crying because of the abuse,” said Iraola, who is the owner of Chela’s Restaurant & Taqueria.

Suddenly, the man behind him interjected. “Then why didn’t you stay in Mexico?” he asked. The audience broke into a collective gasp, according to a video captured by MLive.com.

Heads turned around to face the man, who later identified himself as Tom Burtell. “You need to leave,” one woman in the crowd told him. “That is disgusting,” shouted another.

In a Facebook post later on Monday, Burtell’s son, Matt, called his father’s question a “deliberately racist” one. “His views of hate in no way represent my own,” the post said. “I stand in solidarity with the refugees and immigrants of the world.”