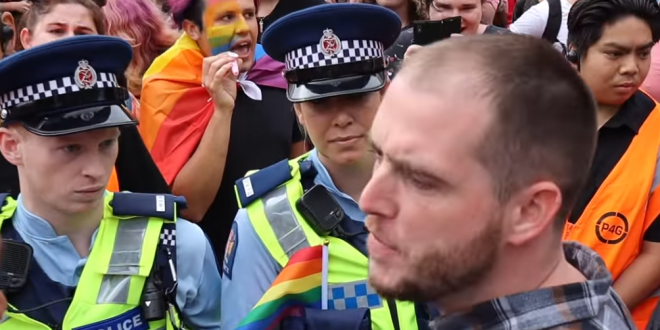 Religious heckling towards participants of the Auckland Pride march was “quite jarring”, an organiser says. About 7000 members of the region’s lesbian, gay, bisexual, transgender, queer and intersex (LGBTQI) communities took part in the march on Saturday through Auckland’s CBD.

They were met with a group of protesters on Queen St, who then followed the participants up to Aotea Square. “It was quite jarring. They ended up being a real nuisance for two or three hours.”

A video uploaded by The Torch of Christ Ministries to YouTube shows a number of members heckling marchers. “We preached the gospel of Jesus Christ and repentance while also telling people they are loved and cared about,” the caption says.

Torch Of Christ’s website shows a Louisiana address. From their mission statement:

Torch of Christ Ministries is committed to the vision of taking the light of Christ into all dark places. This includes anywhere and everywhere that evil has been allowed to cultivate and grow over time which has resulted in high levels of violent crime, occult activity, atheism and unbelief, and reprobate minds.

Across our dark lands, evil has run rampant and the ruler of this world has blinded the eyes and minds of so many lost souls, but in the midst of such chaos and turmoil, a holy remnant army is rising up. Onward we press. We will never stop.

Previous Pentagon: 100+ Brain Injuries From Iran Missile Strike
Next George Conway: We Might Have To Impeach Again