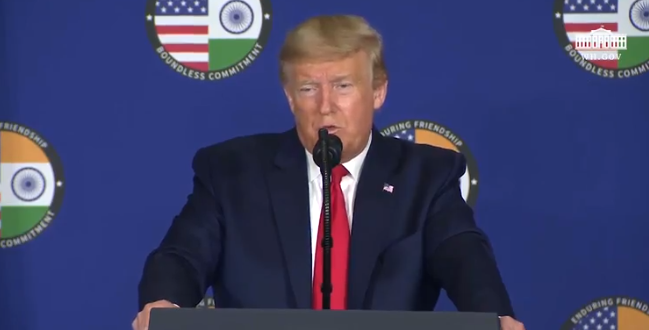 The White House said Tuesday that President Donald Trump was referring to Ebola — not the deadly coronavirus — when he claimed that “we’re very close to a vaccine,” Dow Jones reported.

Trump discussed the fast-spreading virus, which has killed more than 2,700 people and infected tens of thousands more, at a press conference during a state visit to India. The U.S. in late January imposed travel restrictions and quarantines in response to the spread of the coronavirus.

An NBC News reporter asked the president whether his administration’s response to the coronavirus squared with his criticism in 2014 of President Barack Obama’s handling of the Ebola outbreak.

President Trump downplays concerns about the coronavirus in the U.S., claiming the situation was “under control” and was a “problem that’s going to go away.”

Democrats have attacked his administration’s response as overdue and inadequate. https://t.co/21Ee2ZVqn3

Shortly after Trump downplayed the severity of the Coronavirus and said that the spread of the virus was under control, US officials told senators that the virus was highly contagious and that a vaccine was at least 12 months-18 months away, according to three senators present

On coronavirus, Trump claims, without evidence, that “we are very close to a vaccine.” pic.twitter.com/WYpfIObAeB

If you’re seeing these headlines — in context, Trump seemed to be saying an Ebola vaccine was getting close https://t.co/5UJM2dtnH9, not a coronavirus vaccine. (He’d been comparing the death rates for the two.) The White House says he did mean Ebola. https://t.co/t6ylEbb0yF