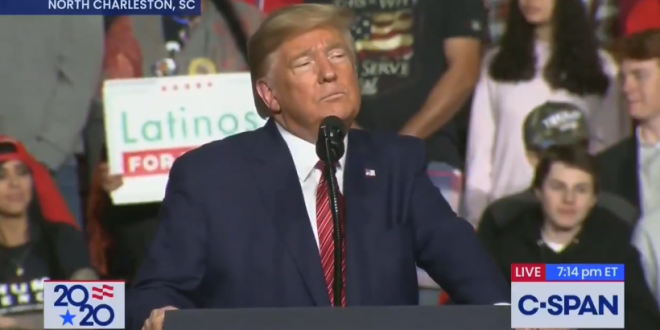 President Trump accused Democrats of “politicizing” the deadly coronavirus during a South Carolina campaign rally on Friday, claiming that the outbreak is “their new hoax” as he continued to downplay the risk in the U.S.

“Now the Democrats are politicizing the coronavirus,” Trump said. “They have no clue, they can’t even count their votes in Iowa.” “This is their new hoax,” Trump continued, adding that attacking the White House’s response to the coronavirus had become the Democratic Party’s “single talking point.”

Trump has weaponized the word “hoax” throughout his presidency, using it to belittle and discredit former special counsel Robert Mueller’s probe into Russian election interference as well as his impeachment trial. He also has a long history of distrusting experts, most notably his own intelligence community and government scientists.

Here’s Trump at his rally tonight in South Carolina dismissing worries about the coronavirus as the “new hoax” pic.twitter.com/Q58d7dI1cb

President Trump has called concerns about the spread of coronavirus a hoax. Do you agree, @VP? And you, @SecAzar? https://t.co/vGb9Cx12tl

Previous CHATTER AWAY: Overnight Open Thread
Next US Signs “Historic” Deal With Taliban To End Conflict